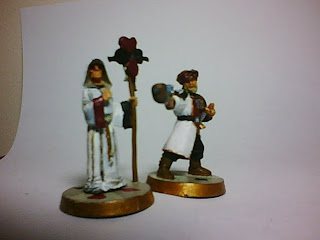 As you can tell, it's sketchy phone camera shot time! Above and below iare my Company Commander, Trump-King Heinrich (he looks a bit like Henry 8th) and his favorite Astropath. I greenstuffed his crown, beard and mustache, as well as for making his arm stick out to the side in a more action-oriented pose. The symbols on the Astropath's staff are also, of course, greenstuffed. 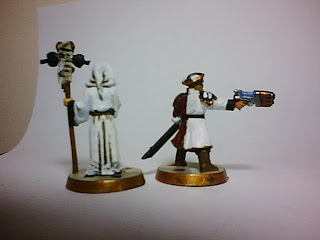 And below is the full command squad, with elements from all four suits: 1 clubs medic, and plasmagunners from the diamonds, spades and hearts suits. 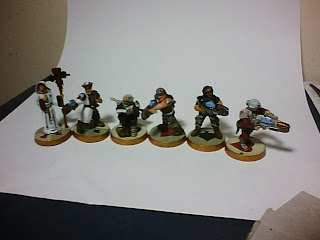 The other part of the challenge was to create a data sheet for our commander, so here we go:

"Heinrich wasn't always the glorious commander of Fortuna's 24th Regiment. Born in lowly circumstances, Henry was the 8th child of his family and would have been doomed to a life of labor had he not fallen into the machinations of the House of Card. He saved the life of one of the lesser nobles and was, as a token of gratitude, allowed to join the illustrious ranks of the Fortunan PDF as a member of the Clubs suit."

"Henry performed very well, earning commendations for valor in his daring defenses against the periodic Daemon infestations as well as against the enemies of the House of Card, the Lords of Dice and Derbishire Overlords. In particular he seemed to be a great adept of the ancient art of Tarot reading, always using the cards to predict the enemy's movements and react accordingly. His minor psychic talent was determined to be a blessed gift by the omnipresent Inquisitorial authorities and, with many steps taken to make sure that such a man would remain ever loyal to the Inquisition, was allowed to continue operating in his command capacity."

"When a 24th regiment of Fortunan soldiers was called into creation, Heinrich was determined to be the most able man to lead the 1st infantry company, as it relied on careful planning and efficient management of reserves and method of engagement to maintain peak effectiveness. Ever since Heinrich has served the House of Card and the Emperor faithfully, leading the 24th regiment with guile and honor."

Before rolling for mission, both you and your opponent(s) must roll a die each. If the results are different, you may add or subtract 1 from any or all of the following rolls: roll for Mission, roll for Deployment, and the roll to see who goes first. If the results are the same, your opponent may add or subtract 1 to each of the aforementioned rolls.

Tactical Directive: Euchre
Each Fortunan regiment is bound to a particular game of chance, as in this way their souls may be further safeguarded from the predations of Chaos and be guided by the Emperor's will, as well as reminding them of their pride in their homeland.

This directive extends to the opposing player(s) as well, as the Fortunan 24th are deeply ashamed if they themselves are "Euchred."
at 5:12 PM

Very nicely done! I really like the sculpt work you've done, and the background history is highly cool!

Definitely a fantastic submission - Keep up the great work!

Great work, really. I can't even tell where you used the greenstuff--so that must mean that you did a great job!

Nice use of "euchred" too!

Awesome stuff mate- I especially enjoyed reading the Data Sheet, it was a fantastic read and very in depth. Paint job looks fantastic too, and as with Shrink to Fit I can't even tell where you used greenstuff which is already a success!